A Horse Called War Good for Glue (and Nothing Else) 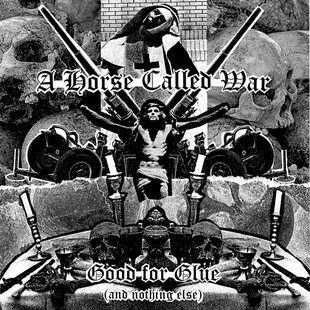 A Horse Called War were one of the doom bands that bridged the gap between the Iron Monkey forged UK scene (alongside Charger, Lazarus Blackstar, Khang, Mistress, Dukes of Nothing et al) of the late 90s/early 00s - providing a much needed presence to keep the flame burning before the might of the enormous doom scene we now all take for granted exploded, around 2012/13. Crawling out of Thetford in 2005, they were welcome torch bearers alongside the likes of Bumsnogger, Agent of the Morai and Berserkowitz.

After a five year break, they thankfully return and now release new music through APF Records. Unsurprisingly they've not changed, still spewing hateful and angry sludge, sounding for all the world like a band releasing all the frustrations of living in small town Norfolk, making every note, every lyric fizz with a corrosive bile.

The comparisons are obvious to name - Iron Monkey and Eyehategod. You can probably get cleverer with lesser light sludge names, but essentially its all in here. At its best (eg Don Fyre) it sounds as thoroughly vital - like their lives depend on it - as the best of sludge. It is always downbeat, consistently desperate, the vocals a painful scrawl that makes it feel alive and essential. Not once do they drop in a "groove" riff or comedy beer or weed reference as with so many so called sludge bands from our current scene. It is all in.

When it isn't totally on it though, to play devil's advocate, then it isn't wrong to ask what it is adding. Sludge has grown and manifested in many different, exciting ways. This feels at times like it mainlines Our Problem, an album which came out over two decades ago - as much as those who remember its release may want to pretend that's not true. Should there be an onus to innovate? Or at least point out this potential stagnation?

To be clear, I think A Horse Called War steer clear enough through the strength of the songs and the persistent misanthropy, but with an allegiance between the band and this site dating back more than ten years (as well as being on our then active forums, they played our big all dayer in Camden's Underworld, and our last ever promoted gig in Sheffield), it is worth mentioning as I recognise my potential bias.

More neutral proof can be found directly from the music. Crank up the energetic hardcore-edged Pardon the Pun and any concerns get quickly drowned out. A Horse Called War are truly back, thank fuck for that.