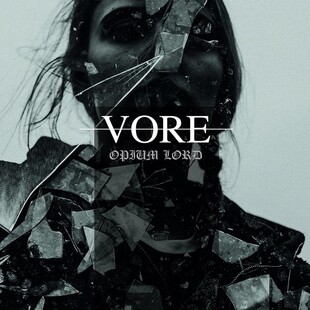 After a frustrating period on Candelight Records, where the higher altitude brought with it a seemingly suffocating stagnation, Opium Lord finally return, via their new home in Sludgelord Records camp. As one of the more interesting bands in the UK doom scene, this is most welcome.

For Opium Lord, despite the pretense portrayed by the name, are not your run of the mill toe the line doom riff warriors. They've grown since the earlier days when they appeared on Witch Hunter Records, and have done so through a restlessness, never standing still and evolving through innovation. And most of all, whether getting the exact genre tag aligned is of importance to you, or whether you just deal in weighty fierce metal whatever the flavour, Opium Lord are just plain excellent.

Once the short, angry noise intro of WWCD is vented and out of the system, Vore proves all of the above praise to be worthy. Tracks two and three are monstrous - Lead Magnet opens with a ferocious riff that has to have you nodding along, like Will Haven or closer to home, Torpor, at their best and most immediate. Centurion is more measured, if still venomous, a developing sound verging on post-metal, with chaotic noises flashing behind the central line, one with beauty and brutality seamlessly forged.

It doesn't let up. See Sherwood is Connector, who's sludge riff rolls over lethargically, driving beneath layers of effects and sounds and a multitude of subtle yet effective ideas that give it life and individuality. Or Suture, a slow burn, forceful through stripped back guitar and blackened vocals, only fully igniting in its final minute.

They even rope in Mike Scheidt on to the brooding Columbia, to lend yet more gravitas on to an album that'll surely generate plaudits worldwide. For it is that worthy - unrelenting in its heaviness, its anger and crucially its songs - not even a hint of respite, not a moment of weakness. Opium Lord prove their importance - no one can doubt it, nor stand in their way.