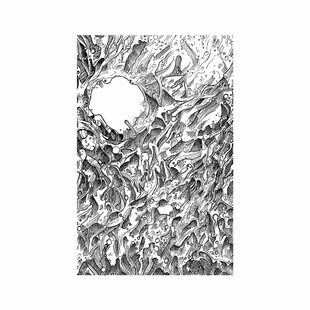 Seven or more releases in, Drawn from Ichor records feel like events to be absorbed, living organisms that can take on differing shapes depending on how you approach and the mood you are in when you enter.

With the freedom they allow themselves to wander through varying terrains - from the loneliness of minimal sounds of the forest to the spacedust from the rings of a far flung planet to the omnipresent threat of a moonlit swamp - Drawn from Ichor constructs are vividly invigorating of your imagination. They use these templates to habitat their differing shades of extreme metal, sometimes subtly, in tune with their surrounds, other times overtly, sparring in and out from the atmospheric to the brutal.

Take Unknown Unknown, the first track here, as an example of the latter, led in through gentle yet untrustworthy rhythms, an eerie space synthetic noise creating an other-worldliness, before the cosmic mist disperses and with it enters pure hell sound. The production levels nosedive to suitably murky levels, and black metal wiry guitars unleash forth.

Manifesting Through Destruction is into its dirty business immediately, a cold and distant black metal sound that gives the suffocating illusion of drowning. It slows appreciably, a death thrash riff replacing the rabid pace. Midway through and it evolves again, a gothic yet soothing murmur lingers in the background, a ghostly ethereal hum. The manic outburst that eventually overrides could be their repel of this siren call of the dead - whatever it is, it is loaded with a venom that tars from out of the speakers. Slightly off tune church bells oddly, yet seemingly fittingly close the chapter.

The triumvirate of tracks ends with Embrace Hollow Thoughts. A chomping riff bites through psychedelic winds with an ill temper, the vocals shrouded as if from unfathomable depths. They sound agitated, unnerved as they unnerve - fractious and jumpy, belligerent with their instruments as they attempt to make sense of the claustrophobic world they have descended into.

For what is ostensibly a black metal album, Drawn from Ichor yet again take you on a mind-altering voyage. For this is their skill, and the thrill of their records, a pure and experimental generation of electricity. As ever, it is alive and invigorating.