Torpor Rhetoric of the Image 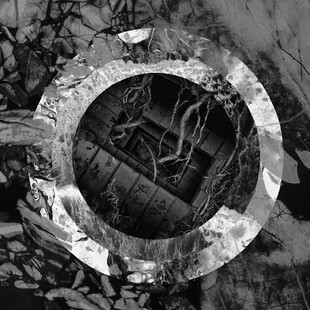 Torpor return, bringing with them one of the most eagerly anticipated albums from the UK doom scene for a long time. Anyone who has had the pleasure of their recordings to date or their tight, mind-blowingly heavy live outings will be glad to hear this. And when they reach the end, no-one is going to be disappointed.

Dense, serious and downcast, Benign Circle quickly descends deep in to the post-metal/doom underworld Torpor have made their home over the last few years. It wades in the long reeds, biding its time, building its strength in the shadows, before unleashing a glorious heads-down metronome riff that'll force you to submit. It is filth, and addictive (I replay it over and over, even on first run through) - this should be the new standard doom-fix prescription.

Two Heads on Gold is near seven minutes of static, spoken word and minimal drums - Torpor are a band with ambition, and a vision which feeds into everything they do. Where I might accuse others who create similar styled tracks of "filler", this is instead compelling as a piece of the wider whole of the album and their art.

It is further evident in the patient creation of Enigmatic Demand that follows, where the attack of the full force of the band launches outward in an instance, yet only after five minutes have passed. It navigates along its narrative with intrigue and emotion for another eight minutes, never waning, constantly growing.

Mouths Full of Water, Throats Full of Ice perhaps best encapsulates how perfectly in control of their art they are. It is unexpected, a deft touch, gentle rhythms and lush vocals, going beyond confines of doom or even metal as a whole, through its beauty.

The sheer, brazen weight returns for the closer. How three of them make this sound is hard to perceive; if I hadn't seen them flatten the crowd I was in recently, you'd have to presume editing wizardry. But no, Torpor are just this loud, with a sound as thick as concrete, a thrilling proposition however you behold them. When the momentum swings forth on this sixteen minute epic, its provides the biggest surges album long.

There has been a change since the debut, From Nothing Comes Everything, which for all its ferocious downtuned riff thunder, had something spritely about it - glimpses of light or fun perhaps, where now there is none. Their direction to here was foreshadowed on the Sonance split, and now we have Rhetoric of the Image, a staggering achievement. In reviewing that debut I stated that Torpor had it in them to be one of the "true innovators in the scene". In a rare example of accurate foresight, I was right, and then some. This is album of the year potential, and places Torpor in the high reaches of not just our UK scene, but anywhere.

Forums - Reviews and Articles - Torpor - Rhetoric of the Image