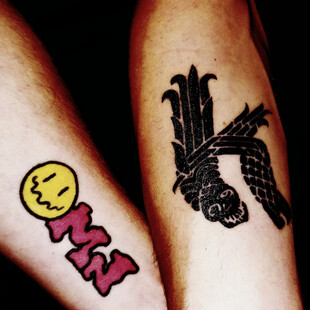 Ask people who Sheffield's best metal band is and they'll probably screw their face up, rack their brain and try and half-suggest Def Leppard or Saxon, but really, is there one? Kurokuma's latest effort has it's tongue so firmly lodged in it's cheek when it comes to that title that it's pushed through Alien-style in a fountain of gore and entrails (do you have entrails in your cheek?). Whatever, that's a bold claim and one that suits them down to the ground, nobody can be that serious.

So the music then? Well this is a departure, but a daring one that the three-piece will probably be expected to keep making after this. A few details, this was recorded by Tich, he of Sheffield electronic music powerhouse Off Me Nut, a label that produces bangers and party soundtracks for dusky warehouses, late nights and early mornings. A chance meeting in Tokyo when both parties were there for separate events led to this recording session and honestly, more metal bands should pal up with producers as good as this.

Kurokuma's metal stance has always been a little left of centre, but here it stands tall as a menacing tower of righteous, burning heavy metal. Opener RVN simply grabs you by the throat, both vocals tag-teaming like the Legion of Doom back in their 90s, spiky heyday.

Forget a straight release though, of course. The swarm of flies that herald Wasp's Nest give a nod to the OMN collaboration being a melding of minds, Tich's deft dub and electronic influence creeping in here to fit the aesthetic. There's been talk of a Necro Deathmort influence from the band themselves and you can definitely hear it, but there's that unmistakeable Kurokuma brooding to it as well. Percussion isn't as tribal and Sepultura as in previous releases, but the ghost of it is living in this calm, measured piece which unfurls like some kind of sexy, smoky snake. If you were expecting moronic sludge metal, you've come to the wrong party here. Leave that kind of fodder to the Pantera hoodied masses baying for the next cliche wagon album. This is serious.

Jamiroquai is perhaps the least expected cover the band could have plumped for here, but here it is. Deeper Underground is off the 90s Godzilla soundtrack, all cool beats and their singer stepping over submerged cars in the video. Here it's rendered into a viscous, fuzzed drawl. Slowed to a crawl, you can hear hints of the original in the lyrics, but this could equally be seen as a deadpan doom tribute, delivered straight-faced with no hint of irony. Hilarious in a way, but it sounds amazing.

The closing remix of Wasp's Nest is OMN taking over, hyperbolic bass chiming with keys, crash samples and any metal far from anyone's mind. So Gamesmaster, Dominik Diamond would struggle to stay upright.