The Well Death and Consolation 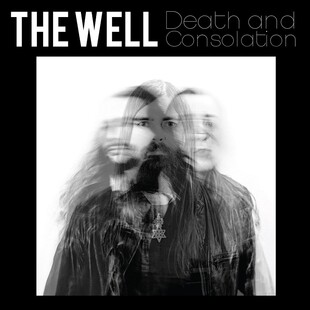 While the opening Saba is middling, about okay Children of the Grave stomp, it sets the template of classic rock with doom overtures. The flair at the end elevates it as well. The Well return, which is most welcome, a shade darker than previous, subtle but evident in the air and outlook of Death and Consolation.

Raven follows and drives the album to the centre of your attention. The beginning flows with the same ease of cool as Nebula at their most free, yet without the Californian sunshine. It is instead overcast, a mood replicated from proto-doom or perhaps more accurately the indie goth of the eighties.

There are nuggets of impressive darkened blues here and there, as well as the occasional nod to more straight up and recent doom influences - Act II's occult sample and familiar tone to the welcoming riff heralding the oft-observed paying of dues to Electric Wizard, for better (as in it's decent) or for worse (it's just too often heard).

Not all of it works, a couple or so tracks meander by, but with leading lights such as Death Song combining 70's psych, punchy stoner rock and doom pessimism, all framed within a constant shadow of Master of Reality, the album is a success.

Forums - Reviews and Articles - The Well - Death and Consolation