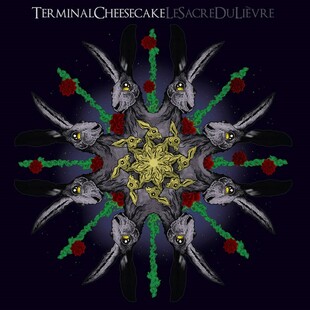 That Terminal Cheesecake have been in existence since 1988 is remarkable. Several releases and a Peel session were recorded before splitting in 1995, before an unlikely resurrection six years ago, with Neil Francis from GNOD joining on vocals. Both sides of that hiatus demonstrate a band of creative individuality, pushing sounds into unfamiliar territories.

Le Sacre Du Lièvre is their second full length since the reboot, again released by the excellent Box Records, and seventh over all. It is an album that is abrasive and remote, yet even in the most out there passages you maintain a connection with the overall ambition.

The first track to be released, V.D.K. Neck, is unsurprisingly the most accessible. It is terrific, thick-fuzzed doom-approaching psych - think Ufomammut crossed with the loose-end output of Hey Colossus. Elsewhere, the song structures are less recognisable.

The opening Wipey's Revenge is dominated by mass noise effect, a miswired gigantic robot careering off course crashing through your town. A slow threat psyched angst wanders in unnoticed behind the main distraction. This marriage of bold and caustic noise up front and centre and sweeping astral noise psychedelia beneath is frequented at several points on the album.

When it works well, such as Saddle Shower, where a repeating riff creating an automaton machine thud is propped up by sweet and simple organ, it creates a dense loop that encloses you within its spell. It isn't always successful however, Bull of the Woods an example where the unhinged noise rock is uncontrolled, uncomfortable and ultimately unlistenable.

These lower moments don't linger, merely the price of enjoying artists committed to experimentalism. The overriding sense of Le Sacre Du Lièvre is a strangely uplifting alignment with its direction and purpose, and in the moments when it truly clicks it is truly engrossing.