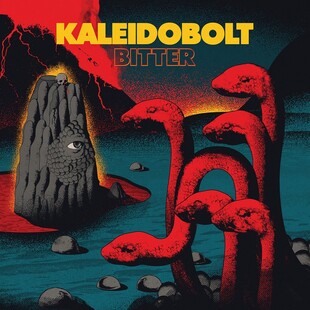 For a made up word, Kaleidobolt's name perfectly encapsulates their mission and their output. This is colourful and mind-melting, but done so with a permanently rocking blast - a meteorite from the far reaches of the galaxy crashing to Earth.

It makes for a fantastic ride, and a relentless one at that. From the off, Another Toothpick arouses - wired and up for it MC5 fuelled garage rock smears and joyous guitar outbursts, 70s moog snyth backing appearing to bolster the vibe. The vocals, when they arrive, fit perfectly, reminding a touch of Wino. The whole is a retro extravaganza to make proto doom revivalists, classic rock and stoner rock fans tingle with delight.

For modern comparisons, think The Hidden Hand or Kadavar, but ultimately Kaleidobolt straddle the ages. Most of the tracks make a statement of intent in the first half a minute, whether its the out there groove of Hydra or the demented Breadfan appearance start to Coyote. It creates an immediacy and a flair that never allows you to drift.

I Am the Seer begins with a slower tempo, a scuzzier fuzzier tone brings the doom in the intro. From there they head off again into prog rock and heavy metal time bending wormholes, always busy, often changing tack subtly, constantly driving ahead with power.

Bitter is a cracking album, constantly busy, always interesting and impossible not to feel happier when in the vicinity of its classic rock glow.