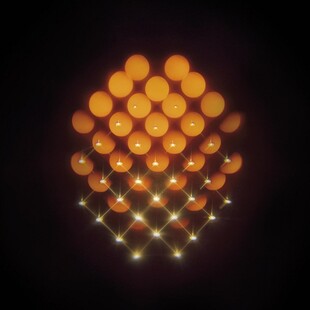 If there's any band that can get even close to the psychedelia in black metal uniqueness of Oranssi Pazuzu, then it's probably Dark Buddha Rising. To find an album of collaboration between the two bands promises to be a trip into the blackest centre of the universe - and so it proves.

Waste of Space Orchestra was commissioned for the 2018 edition of the mighty Roadburn festival, with Syntheosis then worked on further and recorded during last summer. The album is based around a story of three characters (the Shaman, the Seeker and the Possessor), and you can sense the evolution of this narrative as it progresses, without losing anything to a pure or blunt obsession for the concept.

The characteristics of both bands can be heard in everything here. The amazing Seeker's Reflection being distinctly Oranssi with their sound so identifiable, a song that is weird, leftfield and adventurous; a mixture of sharp obliqueness and soothing synth that amalgamates into a beautiful world of strange in a marvellous manner. The closing title track is a cosmic bad trip flagging the work of both bands, a long form disturbing expedition in pitch black surroundings.

Yet for the most part the integration is seamless and all the better for it. The nature of the work means there are many experimental areas, where song structures are only loosely adhered to. There are tracks containing little but the synthesised noises from the far beyond, encased in inches-thick space dust, or purely of unnerving chants and drum patterns. Other moments, such as The Shamanic Vision wander through the galaxy, encountering exploding prog-black illumination, or causing imbalance and paranoia through swirling psychedelia that you could lose your mind within.

The story's protagonists are each voiced by a different vocalist, adding clarity and distinction to the drama. See Wake of the Possessor as an example, a subtle shift in style. It is faster paced and more direct, singular drum blasts detonate, the encompassing guitars create a vortex, all aiding the science fiction theme (inferred or imagined), which at times presents itself in electro-film soundtrack style flickers. It really is a mind boggling release, the scope and adventure bewildering.

Collaborations and commissioned installations can often be art that is amazing to experience, but one you had to be there at the time to get. Hindsight, distance and time passed act unfavourably as upon reflection it merely feels like a dilution of the artists' usual work.

Not here. This is the wizardry of two bands who have the weird and out-there approach at their core. Waste of Space Orchestra provides further outlet to both to explore those wandering wonderful urges, and it pays off with Syntheosis, in a grand and glorious manner, for all willing to follow.