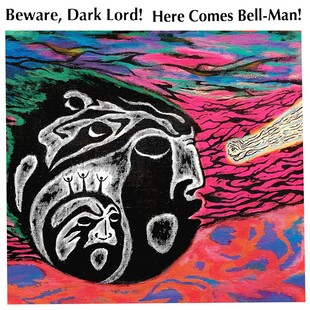 It doesn't take long to fall for the Straytones. I'm only a minute through my first run through and I know I'll not only be favourably reviewing but checking their whole back catalogue out before the night is over. Primarily this is down to the tone, which portrays psych rock joyfulness instantly, added to a cool aesthetic of the artwork, band and release.

The three track EP is set to a story - a garage-rock opera as they describe it - that lends a sci-fi element to a sound already with its head in and around the stars. The villain of the piece is Dark Lord, the title of the opening song. The fuzz is layered a metre thick from a few seconds in, the trap that ensnares you in from the off. It is psychedelia that bridges between indie, garage and stoner, and it is mesmeric. There may even be some Muse at their heaviest and trippiest in here too towards the end, but I'm wary of that being an off putting suggestion even where not intended.

After a minute of the space noise interlude of Abyss, the protagonist of the story arrives to save the day, Bell-Man, the final song. It is spritely with a restless energy and tempo, the vocals muffled somewhat providing a mystery and adding to the retro galaxy vibes. The effects and the percussion that pervade are subtly applied, a light touch and free spirit that reminds of early Black Mountain.

There are only two full tracks here, but as a surprise finding it's enough to have brightened my day. Give this a go, it will no doubt provide the same uplift wherever it is heard.