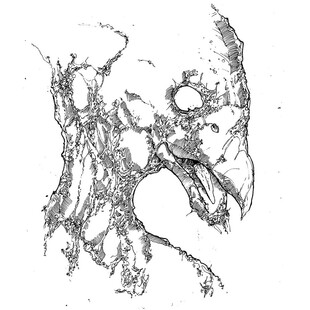 I'm guessing we have all been in the situation speaking with a friend, post gig or demo release from their band, when you have to give your appraisal on the pile of crap they've just made you suffer through. And because we're all spineless/kind (delete as per opinion), you reel out a list of superlatives while internally cringing at your own hypocritical bullshit.

It's so different when the music actually turns out to be great. As here - Lincoln's Temple Steps feature my co-conspirator from ninehertz, Mike (formerly of Flatlands), so this is a long winded disclaimer that I'm not impartial. It's only ten minutes long so just go and make your own judgement.

For what it's worth then, Temple Steps return after a presumed fatal hiatus, with Mike moving from behind the drum kit to just vocal duties, and bringing in a third member - Scott, from Buffalode. Guitars are provided once again by Skinlover's Mark, and the demo has a stunning piece of artwork for a cover provided by Lee of, amongst many others, Blind Monarch and Drawn from Ichor.

Imposters is the first of only two on the demo, and sounds fantastic. It is a notch faster than anything they've released before, driven by the big doom riff. Mike's coffin vocals still assign the whole toward ugly doom dirge, of course, but one with a pulse that is gripping.

The second and final track Crypt Key returns to the pained lethargy we're more accustomed to with The Steps, as I'm now calling them. Slow creeping guitar and drums crawl through the tar-thick fog, the vocals by now grunts of pain, the atmosphere created unnerving in the way only doom of this extreme can.

I'd like to think that, if not actually saying it's shit to his face or on the next podcast, I'd not be writing this review (unsolicited and not delegated, I must add) if I didn't think highly of it - I've got plenty of other things to be doing or reviewing if it were. I'll stop squirming out excuses now, just click the link below and figure it out for yourself.