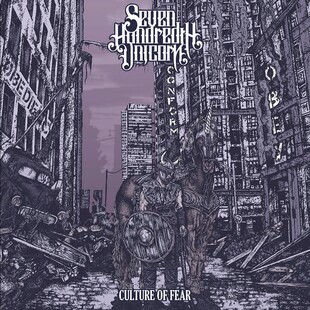 When I received Seven Hundredth Unicorn's debut Ruins of Hope for review nearly three years ago, I expected them to have blown up into scene leaders by now. That was an album of commendable scope, writing and power, with a cross-genre appeal, that I thought would've caught everyone in their web. For whatever reason, it feels like they're still to break through to become more significantly recognised, even at national level. Lets see whether Culture of Fear provides that spark.

The first question is whether it is as good. It starts well. A surprising fierce 30 seconds of pure black metal introduce the album. It is a bold beginning, breaking into early Baroness styles not long after, dipping back into the Wiegedood-ish BM at times thereafter, slipping in a nice slow stonerish doom riff to boot. It highlights straight away that they've lost little in terms of flexibility, nor how to write music that'll put smile on your face at every point of its multi-faceted approach.

From there, there are discernable themes album long. They take habitat in the same shelters of Dvne or even Conjurer, where almost nerdish levels of metallic obsession escape the sweaty bedroom and flower into actual progressiveness and excitement. It is regularly given a shot of impassioned hardcore honesty that is suprising yet always welcome.

It doesn't always work - the emotional hardcore (near-screamo at points - see the latter half of the title track which reminds of Direwolves) occasionally appearing only after a few minutes of water treading Mastodon-ic metal, sometimes only after you later realise you have subconsciously switched off. The thrill of the new angle of the opening is not repeated again either, although the first track released, New World Disorder, does differ, overflowing with adrenaline and anger, like Corrupt Moral Altar at their belligerent best.

Played with every drop of sweat, derived from even the deepest hidden emotion, the Unicorn duo put everything into their recordings and this ties you into its fortunes. Every track has at the least moments of grandeur, and while it isn't everything I'd hoped, I suspect this will tickle the fancy of a wide (and widening) base of doom and hardcore minds that meet in the crossover between. They're definitely on to something special.