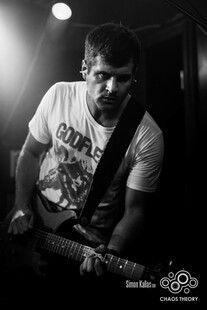 It's Podcast number 30 and it's our second podcast with a member of Kurokuma.

This time it's the turn of Jake, guitarist and singer of the Sheffield-based band who are making waves internationally.

Jake and host, Mike talk about influences, with plenty of detours along the way.

Tracks picked and played are:

If you'd like to appear on the podcast, get in touch via Facebook or email us on editor@ninehertz.co.uk