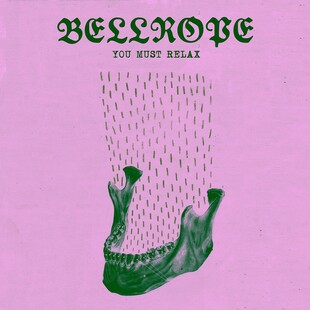 From the ashes of Black Shape of Nexus rises a spirit with a familiar tone and stench. Bellrope feature members of the Mannheim masters of boulder heavy doom manoeuvres, lending plenty to the anticipation of what You Must Relax will offer. The horrific sounds of the opener perhaps the exorcism of the demons that killed off the former incarnation, to cleanse the soul ready for a new personality to take host. Lets hope it works, a I never want to hear such noise again.

That over and done with, Old Overholt arrives with everything you'd hope. Enormous, riff dominant, sludge smeared doom, yet with progressive aspirations that drive, stretch and evolve the track to its full ten minutes. It reminds me of Slabdragger, particularly in the yelping screech that frequents, but stylistically song long also. It is magnificent.

The title track's named instruction feels like a threat the way it is delivered, crushingly heavy and gutturally roared. It develops from this slow density beginning - part Thou cerebralism, part Graves at Sea pain, but also with a couple of growling increases in propulsion that treads forth without care, damaging the grounds beneath its tracks. It is thrillingly violent in these moments.

TD200 is similarly infectious, its contagion spreading from the moment the whirring riff surges into action. The multi layered vocals, some nearly spoken, some sampled, show another hand, a Mike Patton styled craze within the gloom, giving variance between the four main ten-minute and more tracks.

The eighteen minutes of CBD Hereinunder conclude, but it wastes none of them getting into a massive hammering riff, unsettlingly lashing out somewhere within a mapped out triangulation between Slomatics, Suma and Old Man Gloom. It pummels onward, slowing, vocals hushing seemingly as a command. It is amazing how it constantly demands your attention despite its length. As the drums go off kilter and take to the centre to lead out the increasingly muddied noise, the end arrives delivering a spine tingling recognition as to what you've just experienced.

Bellrope both obliterate the void left by Nexus' departure, and erect in an instant a throne for themselves on the peaks of highest mountains of modern doom. You Must Relax - the title unintentionally pointing to the fact there should have been no doubting the quality of any return - is an absolute joy.

Forums - Reviews and Articles - Bellrope - You Must Relax