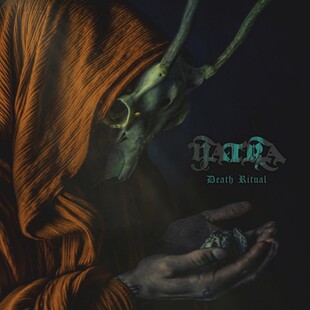 Maryland three piece Yatra shake off the Christmas lag nicely. Their debut album, Death Ritual, is the first I put on with my reviewing hat on in 2019 and its a perfect wake up and beginning to the doom year.

Hour of the Dragon provides a nice stoned staggering introduction, a hazy lethargic air with a guitar tone Wino would surely approve of. It rolls round nicely, a healthy groove, a bit Solace, maybe more kind of like Weedeater reimagined as a pure stoner rock band, eschewing the sludge.

A hulking early-Sabbath riff entry to Sacred Flower and occultish feel amalgamate to a creeping in the shadows threat. There's a decent break out riff a couple of minutes in too making for an enjoyable track all round. With obvious doff of the caps to Electric Wizard the doom is strong, but where as many others collapse into pure Dopethrone mimicry, Yatra have this reference as only one of several strands across the stoner, doom and sludge triumvirate of influence. As such, tracks such as Snakes in the Temple may bring up such memories, but then they slow it down, or diverge through hoarse blackened vocals or follow any other path to mark this as their own.

The next couple of tracks head out on another obvious doom pilgrimage - on a trek up the holy mountain of Sleep. Again, the ease of picking out the homage isn't in detriment (although two in a row pushes it a little), particularly the desperate darkened vocals in moments of Four Directions. The album has got heavier as it has progressed, I notice.

There are plenty of pointers to overplayed doom mainstays throughout, but only in rare moments does it feel in any way tired. Keeping it to a compact eight tracks, and with the devilish venom in the vocals sustains interest and its own vitality. Put as simply as I can, for a debut Death Ritual is a high quality doom album.