Tuskar The Tide, Beneath, The Wall 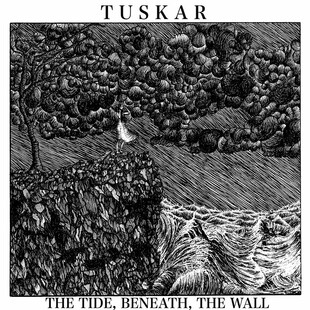 I somehow misappraised Tuskar when I first came across the name, wrongly assuming them to be simply another middling stoner band from our country, possibly by confusing them with someone else. My bad, because it is quickly evident when you properly get to know them that they offer so much more. The Tide, Beneath, The Wall eradicates any semblance of doubt.

The Milton Keynes duo reside somewhere between the esoteric noise doom explorations of Ghold and the wholesomely dense hardcore sludge hybrid of Slabdragger. The latter are linked through the production, from Sam Thredder at his Cro’s Nest Studio.

Slow and low doom; the limitations of a two piece weaponised as fearsome arsenal, the raw sound generated bolstered through volume and grimy noise, base materials utilised to create vast fortifications that cast a pit black shadow.

As The Wall concludes the release, clambering its tortured way along its depraved path of almost Khanate level worship, you’re left only wanting more than the three tracks on offer. By now, any thoughts on my initial mistaken identity, of the number of band members, or of the frustrating commas in the release title, are all gone; I’m now fully locked in. It is intimidating, addictive, and pretty special.

Forums - Reviews and Articles - Tuskar - The Tide, Beneath, The Wall