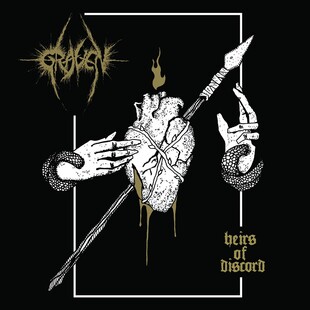 Heirs of Discord flies direct toward you, with an explosive immediacy that is impossible to ignore. The venom riddled Nails type flesh searing hardcore of track one, A Failed Mask is an adrenaline-provoking and attention-prodding excellent start.

Graven don’t relent. The following I Dreamt You Were Dead is more dark cave ugly hardcore horribleness, this time ganging up with bludgeoning death metal riff that clears the path with windmilling arms. I’m proclaiming the album - first run through, two tracks in - brilliant already. The sound is so marred with dirt and violence it draws worryingly welcome comparisons to Vermin Womb’s rancid output - third track To Ravage and Resolve portraying that all encompassing wall of noise that rises this above simple death or doom tags.

After that flagellation of a first half, a nine minute track to greet the second feels like pure masochism. It instead uses the time to stretch - Thieves of Rotted Ilk is no less belligerent, but takes a breath, a chance to explore. It adds a new dynamic, and while never truly grasping the epic heights it aims for, creates welcome variance.

It dips slightly with Backwards to Oblivion, but even here it is easy to recognise a band bristling with ideas and impatience and attitude, as it pulls up and down, left and right, in and out. It ends with a cover of Human Remans’ Human, adding a surprisingly softer touch in moments, lending reverential yet subtly different feel that just about justifies a cover on a six track album in the first place.

The excited, wired buzz of the beginning doesn’t maintain through the whole album, but that’s not necessarily a negative, the album deviates its flow from its originally mapped stream to off track unchartered waters. Instead you’re left with an album or genuine ferocity and depth and pure riff fury that you sense, even at an early stage, you’ll be revisiting time and again. This is a thrilling record.