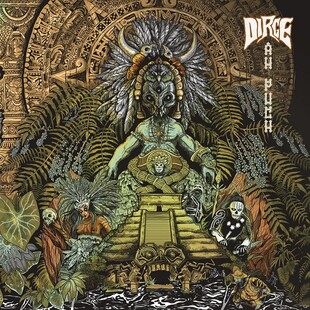 Dirge, from India, have an obsession with ancient Aztec mythology as portrayed in their imagery and lyrics, with the band name reserved for hinting towards the music style at hand.

And yes, it is accurate - bottom of the lake dredged doom. All tracks bar the interlude-ish fourth surpass the nine minute mark, the shriek vocals warming in their familiarity, the epic scale and crawling pace all from the doom handbook but delivered with genuine passion and some fair skill.

The opening Invoking the Demigod’s lumbering dis-momentum wades in a cluttered swamp of mess, a sludgey wholesomeness to wallow within. Montezuma’s Revenge is the album’s calling card, where, beneath the angry vocals lies a faintly detectable restraint in the assault, a movement towards the sophisticate’s doomery of choice of Pallbearer or Khemmis, well balanced, not losing the necessary aggression, no sense of a forced style, a believable transition.

It is a bit hit and miss from then on, without ever becoming bad. Swamp of Blood is sludge, pure and dirty. There’s frisky fun to be had, but generically and instantly forgettable. The final couple both start underwhelmingly, but both then pick up - first La Malinche renewing its focus in the second half, flowering from darkness. The closer awakens from its slumber with an aggressive balance between hardcore aggro and doom lurch, before meandering in fields of proggy dreamlands until the album end.

The list against “FFO” in the promo pack is instructive - all bases of doom covered, from Neurosis to Paradise Lost, with Pallbearer mentioned accidentally but tellingly twice. At their best Dirge’s accumulation of these many inputs is electrifying, and while they don’t maintain it album long, it’s still a fun album to emerge yourself in.