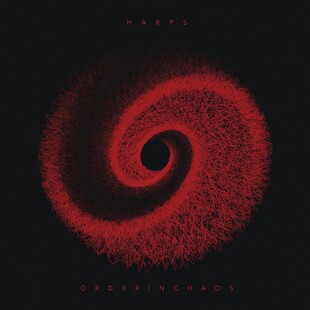 Parisians Harps state they aim to pull from a variety of sources to create something a bit different - a claim made by many yet rarely backed up, but one run through this new album and it’s hard to disagree. Order in chaos indeed.

Going in blind having never heard them before, the opening Murmurs of Earth gives a strong, if ultimately false, suggestion of where Harps reside genre-wise. A Carl Sagan sample around the cosmos, with gentle guitar backing - this feels like Vinnum Sabbathi territory lies ahead. And while it never truly develops, it feels its way through nice doom post-metal space-rock atmospheres.

I’d assumed this was instrumental, but there’s vocals upfront and centre immediately after, in a surprising hardcore style, the instruments attacking as backup. I’m not yet attuned to Harps, but already their multiple stylings make you warm to them. End Feelings is post hardcore, a little awkward in delivery to begin with but as it goes on delicate in a manner that is somewhere between emo (in the original/acceptable form), latter Cult of Luna and Pink Floyd. It’s pretty cool.

It falls as much as it succeeds, but only because they’re reaching further with a welcome ambition. People mixes post and noise rock with Mondo Generator fuzzed punk, and the final track brings things back around, like an elliptical galaxy spiral as studied by Sagan, fixated on heavy space psych.

A mixed bag of styles and success rates, Harps have a lot of credit to play with, due to their boldness, and when it works Orderinchaos is a lot of fun.