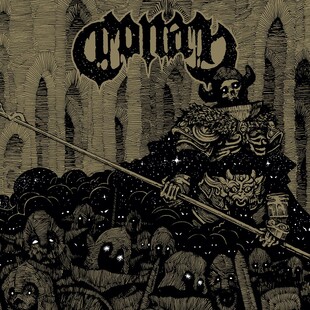 It’s hard to know what to write except “hey, it’s Conan!”

You know what to expect, and you know as well as I that the lack of surprise is not to denigrate what you’re hearing. The reason being is two fold, the first in that the formula they have always applied - riff, doom, heaviness, riff - is carried forward, and then because more of it is only ever to be welcomed. The sound and title of the first track practically confirm it - Prosper on the Path indeed.

And then, just to prove me wrong, two tracks follow to burst pre-expectation. Eye to Eye to Eye has a more upbeat tempo than you’d expect, the throttle energising. The decaying death throes of the drawn out ending are more familiar, but Paincantation's sub minute length is less so, an all instrument war,a nuclear white out grind blast change-up.

As if recovering from the fastest they’ve ever played, they draw out a relatively quiet beginning on Amidst the Infinite, the vocals entering in after more than a couple of minutes... there’s then an unlikely Electric Wizard reminder, despite being prime Conan... although the longer it drones on in hammering repetition, the less this naturally applies. Fuck, wow... this gets better as it goes, bellowing bloody-minded belligerence following that until the end.

There follow three awesome doom leviathans, led by the massive Volt Thrower, all worthy of individual praise, but I’m running out of thesaurus suggestions for “heavy” and “monolithic” by this point.

Still plying that ugly, menacing, joyous groove trademarked Conan, the familiarity with newly heard material diminishes the return none. Conan are masters in their pasture, and Existential Void Guardian may prove to be their greatest crop to date.