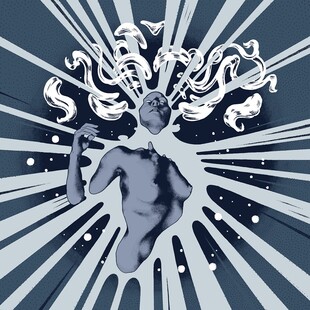 The intro track is short only relative to the ten minute-plus monoliths that dominate the landscape laid ahead on the journey before us. There are five of them, and it’s worth taking a breath before heading in, as it is likely you’ll be subsumed for the best part of an hour. Bast have proven to be one of the most exciting bands of our isle with their Spectres debut and live performances since; their return has been much awaited.

Far Horizons - boldly heavy immediately. Bast bring dynamics, post-whatever mindsets, but never at the expense of weight and momentum. This quickly brings in both black and death influence into the doom core (unafraid to cross boundaries, like fellow Brit essentials Conjurer). It lowers in the middle, with a tangible emotion that generates a tension for any impending heavy release. They’ve only released one album before, and I’m only one proper song in, but it feels energising to have Bast back.

Nanoångström - mogadonic lurch over some admittedly laboured lyrics for near four minutes, the first weak spot on the album, it then builds in the shadows, out of which comes beauty, a post metal jam played with positivity, thrilling to witness. It changes again a few minutes later, a surge, vocals returning, faster, committed - truly engaging.

A Red Line Through Black - doom to begin, slow and heavy, followed by a distinctly Neurosis gravel vocal as it quietens. It tags itself to that line of influence for the majority of the track, although it later threatens to break free pretty spectacularly.

The Ghosts Which Haunt the Spaces Between the Stars - bewitching opening, a similar approach to black metal within doom and hardcore taken by Jotnarr. As this phase ends, a purer black metal direction is taken up, almost surprisingly. Chris Naughton of Winterfylleth lends vocals here, and it is apt. Wanders into a death doom fog, from there flowering into an amalgamation of all the sounds that make Bast so great, the mid ground of doom, black metal and post metal intricacy, for one final time.

Yeah, I’ve gone track by track, which is over the top, but I’d say that mirrors the investment you’ll place in Nanoångström, and the extent of dividend received in return. It doesn’t feel like an album from that band from our national scene (although that’s true of a lot of UK bands nowadays), more a statement to fans of the shared genres worldwide. It is as good as we’d all hoped.