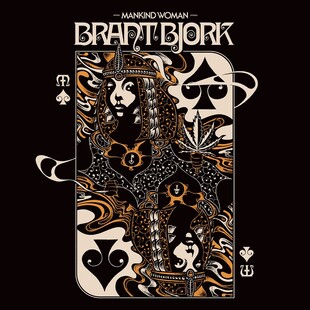 Brant Bjork’s history doesn’t need retreading here. Music that has his name against the writing and drumming credits will live forever, and he will always be thought of fondly by anyone with even a passing knowledge of stoner rock.

His solo albums began spectacularly - Jalamanta, his debut, is a record of blissful perfection, and while occasionally patchy, the early follow ups including the Operators album, Saved By Magic and Keep Your Cool still oozed a warm desert cool.

Latterly this breeze has too often flattened to a chill, too reliant on his signature laid back vocals and summery guitar, not enough stand out tunes. Recently signed to Heavy Psych Sounds, including rereleases of his back catalogue, in between those comes Mankind Woman, his thirteenth new album.

Early signs are positive. It starts on the front foot (as opposed to the sun lounger laze of recent), a stomp to Chocolatize that is fuzzily warming, impossible to resist. Pisces is similarly excellent, heavy on the retro rock easy flow, lyrically intriguing, as ever - “I’m so sick and tired of being sick and tired.”

There follows a number of tracks covered less in splendour, yet still enjoyable. There’s a free and loose, low-intricacy Hendrix Experience vibe in and around that holds your attention. It’s interesting to note the title of the penultimate track - 1968 - particularly in reference to an earlier song by the name of '73 (from Saved..., and one of my favourite songs of all time) - there are nods everywhere to times even older than previously referenced.

This is exemplified on a couple of banging tracks around the centre of the album. Somebody is Pure Funk Strut, fuck yeah marvellous it is. And then Pretty Hairy, with its hip shaking 60s psychedelic swing, equally awesome. I know I’ve fallen for this album by this point.

I’d never be too harsh on any Brant Bjork album - his are the only records I’d state as perfect background music as a compliment, not a dig. But Mankind Woman is more than that, it is a damn fine record. That it radiates a cool doesn’t mean too much - Bjork does this at all points - but allied to such life affirming rhythm, well, you can’t beat it. Thirteen is a lucky number here, as this is back amongst the thin air of the heights of the early work. I couldn’t be happier.