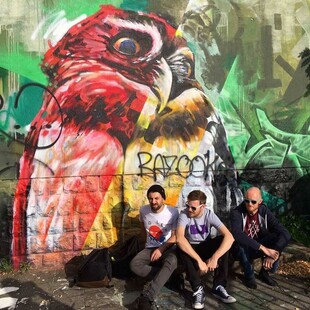 Sometimes fate conspires against you. You have to kind of grin and bare it.

a-tota-so have had their fair share of shite the past year or so. None more worse than having all of your equipment stolen. We see it far too often on social media, a band on the road loses all its hard-won gear in a moment, pleas go out but often you know that's it. a-tota-so, which has been created from the excellent Cheap Jazz and Alright The Captain entering hiatus had this exact trauma, but have emerged fighting.

This record is their debut, funded by a indiegogo page to get them over the line and sounds just brilliant. The sum parts and much more of the members' previous bands, think math rock, but with a more freeform approach. Riffs twist and turn, but there's a fun, urgent feel to proceedings. No more so perhaps than on tracks like Double Deaf, which sounds playful at one moment, and terrifyingly up close and personal the next.

a-tota-so are a locked-in, bonafide unit though, witness the skintight interplay on the excellent Notionology, which takes off at times like a 1980s videogame soundtrack. The parts which make your jaw drop here are often the simple whipcrack tightness at which they play. Bass, drums and guitars have never sounded better together in this genre.

There's moments of calm on display here too, the beautiful Acer moves in fluid, liquid motions and offers a less chaotic period of reflection. It soon perks itself up though, again underlining that fine interplay the three members have. Cut of any extraneous fat, this is lean, focused and intense stuff.

Always on the road and always a live spectacle, a-tota-so have proved they are relevant with this release. One which contains surprises and enough 'woah' moments to warrant multiple spins.