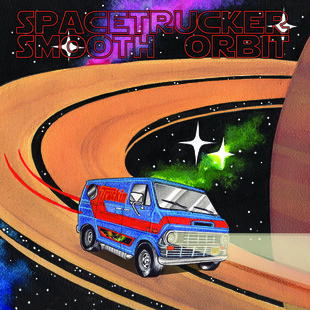 The least subtly obvious stoner rock band in the world return. With packaging and naming conventions lifted from the leftovers of a Fu Manchu brainstorm session, the music follows exactly as you’d imagine.

Spacetrucker’s debut Launch Sequence was endearingly comical in its retro vision. The astral Winnebago hasn’t deviated it’s path far on Smooth Orbit, but they have certainly developed, grown in a confidence that radiates at several points.

See Sample of a Sample; heavier groove in the rising chorus, pulling back into easy flowing rock during the verse, it is of course familiar, very Truckfighters in its smooth transitions. Or follow up Not As Hung - ballsy, Alabama Thunderpussy upfront attitude. You can easily land punches - it’s naff, dated, simple - but that’s to miss the joy that is obviously emitted, like our own Grifter riding a high wave.

It dips a little in the middle, critically adding boring to potential criticisms alongside the standard generic argument, but it has some high moments later on, none more so than Hotbox Airlock showcasing more depth than previous and than I give them credit for. Think of the less dense output of Colour Haze’s Elektrohasch label (eg Rotor) with the cool desert pop sensibilities of Masters of Reality.

Maturer than before, in development and ownership of originality, without losing that nostalgic fun ride feel, it is still a well trodden path the sound navigates, offering little but some good tunes. Sometimes, in the right mood, that can be enough.