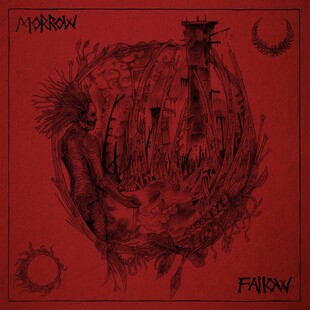 Why aren't Morrow on the lips of everyone in the British doom and hardcore undergrounds? Their debut album Covenant of Teeth was a largely unheralded masterpiece, and while Fallow may not yet be officially released yet it has been available on bandcamp as name your price for months now, and I've not heard a word about it, no word of mouth, no promo. It is entirely possible I'm just mixing in the wrong circles and you're all shrugging your shoulders going yeah, Pete, we know... I hope so, if not, fuck, what's wrong with us all?

This is masterful. The near thirteen minutes of Auguries of Menace showcase all that is right with this band. Post metal, black metal, emo, screamo, crust, doom... violins... there are hints to all, but not as some muso patchwork mess, but a tightly knit coherent reimagination of how our sounds of darkness should be addressed.

At various times I think of reminders of, amongst many others, Hammers, Dawn Ray'd, Fall of Efrafa and Botch - not normal bedfellows, but the tapestry of influence is sourced from a widely cast net. Even more expected markers are there not as where this owes a debt, but as a description of the standards set - see The City of Gristle's Neurosis level granduer as an example; full input, nothing left behind - body, energy, soul, sweat and emotion exhausted, making it sound absolutely vital. A galloping drum tattoo launches the second half along on a boisterous wave of unbelievably good weighty hardcore that the Deathwish roster would look upon with envy.

That impassioned approach, the metallic hardcore in amongst so many styles raises the bar at all points. This is an album of brave scope, the natural feel to the incorporation of so many threads in its harvest what crowns its mighty achievement. Meanwhile, indepth research reveals Morrow to have several thousand FB likes, to dispel my initial concerns. All is well with the world. Those who haven't heard Fallow yet are in for a real treat - it is magnificent.