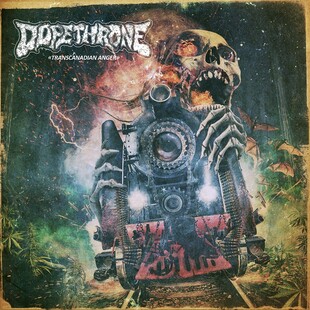 A new Dopethrone album, same old sludge tropes to confront, the originality vs enjoyment argument to be addressed again.

Their stencil template sound handed down from generations previous obvious from scuff and wear on the inner edges, they lay things down as expected from the start and vary little from that until the end. Planet Meth has a nice, rolling sludge riff, with a Weedeater sound and Bongzilla vocals (or at other times vice versa). It's cleverly simple, deliciously grizzly as of course it is, easy to switch off critical thinking and nod along to, but outside of that state, what does it offer that hasn't been done before? Nothing is the honest but easily arrived at answer.

If you love your sludge pure and simple, happy without anything fresh or new then Dopethrone are probably up there with the best of this crowd. Delve in, there's enough weighty grimy riffs to satisfy you for months. For everyone else with a vested interest and love of this genre, for those frustrated by its often staid stench of stillness, avoid.