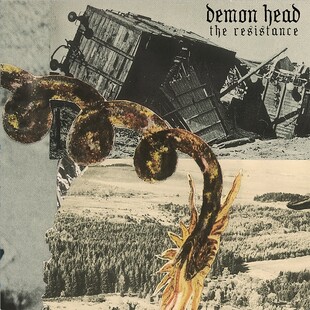 Demon Head have shown flourishes of special stoned vibe retro rock for a while, and while they have been occasionally inconsistent, and in need of an individual voice, reached a new peak on last album Thunder on the Fields. They return now with a two track seven inch.

Not to say they're mere copyists, but this, the opening title track, sounds very Graveyard. Arguably, all that's saying is they're a good rock band with proto-metal touches and flowers in their hair, but there's more specific reminders, the lament in the vocals for example, that makes the comparison unavoidable. This is therefore - or none the less, depending on your starting point to originality and both bands in general - very agreeable, a grand flow, a sorrow hanging despite the summer haze that you feel should only conjure smiles.

Flip the record to Rivers of Mars and now, well, this sounds more Witchcraft, vocals now very Magnus Pelander. Perhaps I'm reaching since I've got the thought in my head, but the proto-doom is definitely a notch higher here.

I have really enjoyed this, not that you might know from above critique. The comparisons are too obvious to not focus on, but the songs are of a high quality, and as good as anything either of the Swedish masters have managed for a while, at least until the (hopefully redemptive) Graveyard album reaches us next week...