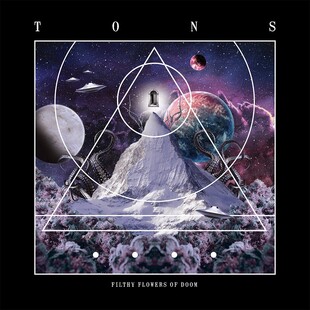 Sometimes familiarity breeds contentness. For all the thrills of being witness to new ground being broken, new paths forged within and beyond the genre lines you so closely hold to, occasionally something will come along that sounds like everything you already know and love, with no new angle, no signature, but not even cynicism can hide the enjoyment generated.

Tons, from Turin, are sludge and they do little to hide it. Pure groove weight, with everything slotting into place - the album title, the magnificent, ridiculous song titles, the riffs, the vocals, the subject matter (weed duh), the samples. It is impressive in its consistency.

Take opener Abbath's Psychedelic Breakfast (what did I tell you about the song names?), sludge riff backed by a sample of a news item on the subject of weed makes this pure Bongzilla worship immediately. Vocals enter later on, only furthering the comparison. It could all be a castoff from the Gateway recordings, but despite that impossible to deny that it's not addictively dirty sludge goodness.

99 Weed Balloons, again more than decent, cosies up to Weedeater, whilst Girl Scout Cookie Monster hedges its bets by being indebted equally to both influences. To hear the hoarse croak of the word "cookie" is value alone. It's during my highlight, Those of the Unlighter, that you realise that it's the riffs that make it, you'll know roughly what they are like without hearing it, but they're head-nodding swamp-stained big-bastard monsters none the less. With there being just five songs helps, the album is without flab, concise and positively rammed.

If the tone of the review comes across as patronising, then I've done Tons a disservice, although you suspect, when singing songs such as Sailin' the Seas of Buddha Cheese, they're healthily not one hundred percent serious themselves. It's likely you've heard every component part of Filthy Flowers of Doom before, but as long as unoriginality per se doesn't bother you, you'll get something out of this none the less.