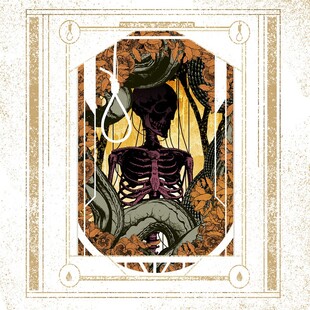 After a review of a split funeral doom behemoth of a record put out on the Australian label Art As Catharsis, I checked in on their releases more closely. They're not what you'd expect, not from my introduction. Mixed in with such extremity are records of psychish mysticism, art jazz and leftfield pop. It is a wonderously kaleidoscopic roster, and more power to them.

Which brings us to their latest, by Kiwis Bridge Burner, a sludgy horrible blackened hardcore outfit who never cave into the light. The opening The Blood Easily Follows brings to mind a slightly obscure reference for those without a keen ear on the UK sludge scene of 5 or 10 years ago, but the vocals remind me of Chris from Agent of the Morai and Wizard's Beard. The viciousness of the guitars a deadly instrument stabbing wildly in the dark, boring holes, Hexis' template of nihilistic negativity borrowed.

My mind then wanders to a series of dual comparisons, tracks as the procreations of celebrity extreme metal love matches - The Blood Never Lies the spawn of Celeste and Botch (should be cool... and is a bit boring), Keehauler the deformed lovechild of Coalesce and Soilent Green. Also should be cool...and is - especially the pure heaviness the middle runs you down with. It is here I most frequently return to on subsequent replays through.

The bellowing earthquakes of the middle couplet of tracks, black as night hardcore rumbling through, are followed by Cultfathers, which threatens to wander closest towards the blackened border of influence, but mixes it with vocals that sound a bit screamo, a bit Will Haven, creates something a bit different to what has come before, something unique altogether. It isn't the most immediate track, never breaking out into reckless abandon, but it does stand tallest.

The final duo pass me by a little, slower than before they get a little lost on the winding path of progressiveness, although the heavy outbursts are still satisfying. All told, despite requiring a little more individuality for full acclaim, this is an enjoyably nasty, aggressive and bleak hardcore record.