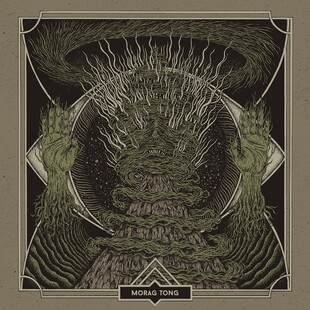 Morag Tong, from our capital, have created something quite special here. For a debut, Last Knell of Om is at times remarkable in its ambition, at its best clouding their doom in psychedelic mystery.

The album opens with the instrumental Transmission, trippy but never densely so, a less desert fried Space Cadet, nicely chilled. New Growth is doomier instantly, Monolord-style for the opening couple of minutes, kicking back into a loungey haze thereafter, reminiscent of the excellent movements across similar styles achieved by Haast's Eagled on their last album. It is ever so relaxed, even when it reintroduces the heavy, increasingly so with a mighty Sleep heft, psych slack and doom lumber married by a convenience of the same non-pace.

It occasionally feels as though they aim for a Yob style etherealness within doom landscapes, occasionally failing to supply the necessary gravitas to elevate it to such plains, but on the whole providing welcome grandeur. The eight minutes long each middle pairing of We Answer and To Soil reflect this. The former gently progresses for several minutes, pleasant enough but meandering as if it forgot what it came here to achieve. It does break into heavier fare doom dynamic, but this is going on three quarters through, and even then it does too little. The latter, however, is more successful in bridging the gap and grabbing and pulling you in.

It all ends with the thirteen minutes of Ephemera / Stare Through the Deep; dream state entry, whispers and mellow rhythms, awoken over several minutes with a steady increase in volume and pulse. Seven minutes or so through it detonates, gloriously, heaviness interplaying with a settling almost-trance inducing state thereafter. It is spellbinding conclusion.

This places Morag Tong up on a pedestal, up there with fellow British adventurers such as Enos, Earthmass and Haast's Eagled. I've truly enjoyed Last Knell of Om, an immersive album that encourages you to engage and travel alongside, an invitation that is rewarded with a grand psych doom experience.