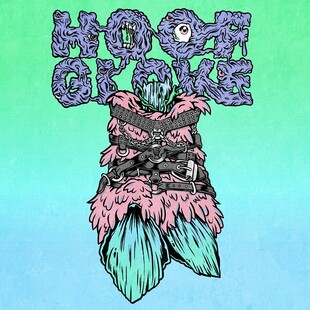 I'm going to be honest, before I even began listening to the self-titled debut EP by Leeds four-piece Hoof Glove, I spent a fair amount of time musing over what on earth a Hoof Glove is.

The artwork for their inaugural effort, being released via Don't Drone Alone, doesn't give much away either. So, I gave up guessing and hit play assuming the name of this band will be one of life's great mysteries.

With members from bands such as Hex, Famine, The Afternoon Gentlemen and Cattle amongst others, I had a certain level of expectation about Hoof Glove and that expectation was it would be either very fast or very slow but very heavy. Much to my surprise, and certainly not my disappointment, this is a big step away from those name checked bands.

Opening track Incandescent Drupes allows little more than 16 seconds before frantic drumming and high-pitched vocals start ripping at you like The Locust had been reborn, albeit in Yorkshire. Despite the aforementioned frenzy of beats, drummer Steve Myles impressively keeps the whole thing together along with bass player George Wright while Lewis Millward does precisely what his role in the band is described as by making noise.

Despite only listing one vocalist, Laura Tyndal, it certainly doesn't sound like just the one. This is most evident on final track Fugacious (which I had to google), which was a winding, tempo hopping, change of pace from the rest of the EP with some real nods to Lightning Bolt.

There are a fair few bands that I would expect Hoof Glove to draw comparisons to. The Locust, Lightning Bolt, Melt Banana, An Albatross to name but a few but Hoof Glove are most certainly a breath of fresh and are revitalising a sound that hasn't been done well for probably 10 years. It would be unfair to pigeon hole Hoof Glove with the bands mentioned above but it wouldn't be right to do this review without putting them in that league, which is what they definitely deserve with this debut.