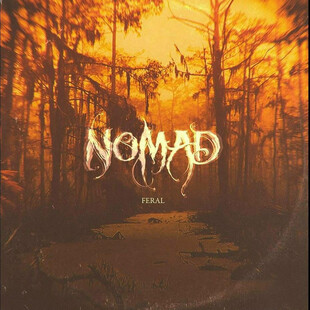 Manchester has been a potent breeding ground for many bands over the last decade considered “heavy” Nomad are no exception to this. Fronted by The Reverend Drian Nash, Lewis Atkinson with the rhythm fort being manned (and womanned) by John Carberry and Hayley McIntyre.

Feral is the band’s debut album, a sort of miserable cherry on the back catalogue cake which includes a solid split with Wort and their eponymous debut EP, The House Is Dead, named after Drian’s experiences in mental homes.

APF records (Manchester’s righteous label which is slowly building up a roster of artists that include Desert Storm, Barbarian Hermit and Trevor’s Head to name but a few), has taken the wheel of Feral.

Feral opens up with Curse of the Sun, it is like a slow shot of audio-heroin, it’s introduced and closed by a phenomena that Manchester experienced a few years back where strong winds produced an unnerving drone over the city when combined with notable architecture, this sample adds the perfect breeding ground for Hayley McIntyre to gradually introduce her cavewoman manner of drumming. This also paves the way for Lewis Atkinson to build a fierce and yet formidable guitar tone and open the door for the rest of Nomad to march in.

Following on from the opener, the album gets into full swing with the album’s title track next, this track draws a lot of the bands favourite influences into one forceful smack to the ears, it swings, it dooms, it sludges and above all it’s pure Nomad. Having seen them live on a few occasions, this track is a true representation of the band and is always delivered with an iron fist mentality.

Swarm, the album’s third track bangs in without warning, this track is where Lewis Atkinson unleashes his inner Kossoff with a solo to close the track that shows his sheer versatility as a musician, Drian’s vocals showing effortless confidence throughout, rhythm section staying solid throughout, it must be said that the duration of Feral, there is no weak spot in the recording, production or any aspect that I can find, even after repeated listens.

Carberry’s Thunderbird bass introduces the next track and McIntyre fires the starting snare for Drian to roar in with sheer aplomb. There’s a great deal of venom in the vocals on this track, coupled with Lewis’ riff, it really couldn’t be tighter if it tried.

Adding an acoustic element to any record can either be a disaster or triumph, in Nomad’s case, it’s quite the latter. The riff transforms from acoustic to electric seamlessly. During this track, Culture of Ruin, Nomad prove themselves to be more than just the average heavy band by incorporating stops and different timings for parts of the riff that you genuinely couldn’t predict unless you have been welcomed to their writing sanctuary of Ancoats.

The recording quality of this record is a world away from the somewhat overused and ever present sound captured by the mighty Skyhammer Studio. It has been done in a way that allows variation and a fresh approach to heavier bands and holds its own in more ways than one, production, amplification and the overall mixing shines.

It must also be noted that unlike 99% of all other guitar players, Lewis Atkinson has opted for transistor amps for practically all of this record, that fact alone makes me wonder why anyone would bother using anything other that transistor after hearing the density of the tone achieved here.

Up next, Feral blasts on with Feed, this track, with its true to form, solid riffs and rhythm section adds a brief nod to Millionaire, is likely to be one of the fan’s favourites, again here, there’s excellent timing and breaks, this could be down to Hayley McIntyre alone but again, Lewis Atkinson and John Carberry are firing on all cylinders throughout, the listener can draw their own conclusions.

Closing a record like this would be a difficult thing to do, Nomad however had no trouble in doing so, it feels like the record slows for the last track, bringing the listener down slowly and somewhat comfortably. The final track called Shallow Fate is more of the same bludgeoning riffs, heavy-handed beats, interesting time signatures and above all, the THC obliterated vocal cords of Drian Nash, this final offering on Feral has two Drian’s in the chorus’ which has been painted into this record with finesse.

Quieting down for the finale, I would like to draw some comparison to Pelican, Sabbath and Kyuss for parts of this album, but I feel such comparisons are usually cheap and quite disposable.

There isn’t a band doing anything near to what Nomad are doing, they’re unique, they’re holding their own and their not following the rest, when you say their name a few times after reading that last part, you’ll understand why they are called Nomad.