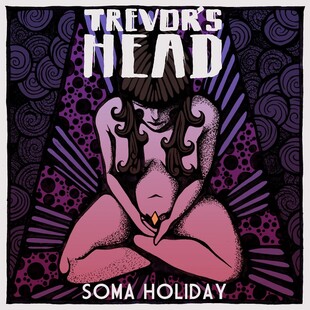 This is a truly eccentric album. It is made up of so many different influences and styles it is hard to keep track. And despite a large percentage of the composite parts being worrisome individually, the boldness and sense of fun is hard not to endorse.

Sleepstate's interesting, bustling, fizzing stoner rock, reminds me a little of 500 Ft. of Pipe, which is good news. The vocals grate a little to begin with, but through familiarity and with input from all three members this annoyance tails off quickly. This is pretty fucking good actually, ending on a rousing high - setting up a misguided belief that a strong stoner rock album lays ahead.

Across the next handful of songs, there's stonerish Britrock styles, a faster track which is a smidgen of Dukes of Nothing, a larger dose of a band such as The Dwarves (due to the silliness inherent), and on Ghost, following the big glory riff that greets, a sound that I note as 'Torche gone grunge', with all the intrigue, potential and horror that thought conjures. It is admittedly entertaining.

The consistent stylistic volte-face continues album long, each track different from the last, different from any other. It does start to tail off in terms of acceptability - there's a nu-metal reminder at one point - and in terms of how long you can live with this quirkiness. While Clerical Error's Tool/A Perfect Circle turn is fine, the half minute hardcore grind of Writer's Block sounds ripped from Nazi Punks Fuck Off, and should have been left in the practice room. I Can't Believe It's Not Better's James Hetfield/Ben Ward aping vocals, and cool flute interludes are good, but the whole should indeed be therefore better.

Yes, it tires towards the end, their need to put every piece of influence, every thought down a hinderance, right down to the ultimate kookiness of the 'chicken song' bonus track (who does those anymore?!) of Butthole Surfers lunacy levels.

Yet ultimately, having come back to it, and able to dip in and out to my preference, I'm smiling again, and you can only really applaud a band so out-there, so in their own world, as to think that this is acceptable behaviour. Good on them.