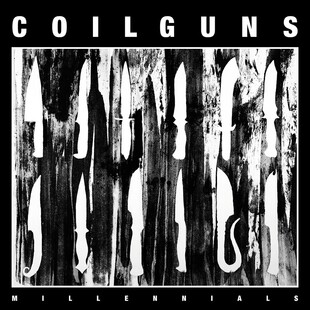 This is truly something, a hardcore record bursting with energy and invention, it is hard to nail down to genre pointers in the way it references so many. At its heart it is pissed off and restless, with full life force invested into its recording, nothing left in the tank - Coilguns are the type of band, like Kylesa or Modern Life is War or Employed to Serve, to give everything they have at all times, all sweat, reserves and emotion exhausted.

The Swiss quartet, featuring members of the revered The Ocean, transmit this energy to the listener. Anchorite's vocals of desperation and despair are eventually joined by whirring guitars, a menace restrained, blackened hardcore threat readying for attack. There's a post-hardcore groove to Deletionism, but with a harsh face of raw blackened guitar sound. It never goes for your throat, but all the same is burning with vitality, visceral to experience. The title track brings the full throttle, and it sounds so good. Punk mosh in absolute darkness, somewhere between Hexis and Converge.

That's just the first three tracks. Variance can be found throughout, from noise-rock post-hardcore, such as on Self Employment Scheme, that sounds like Future of the Left spiked with downers and metal, to the lurking post-metal ominous fashion of Ménière's, clouded with distortion, screams in the background that start to blot the sky in increasingly grim and gloomy tones. The longest track, Spectogram also stands out, moody low end noise, doom paced crawl even as the drums enter, it doesn't kick on, the rolling drums creating a surreal atmosphere that's hypnotic - for a track that doesn't really go far, its odd how engrossing it is, and how I'd be happy for it to go on longer.

Imagine the disparate styles of Rorcal, Birds in Row and Ken Mode chipping into a hardcore frenzy and... well, you'd be nowhere near, my need to compare getting the better of me, but you see where I'm going. Millenials is a great record, multi-dimensional and so alive, it is hard not to be taken in and carried along.