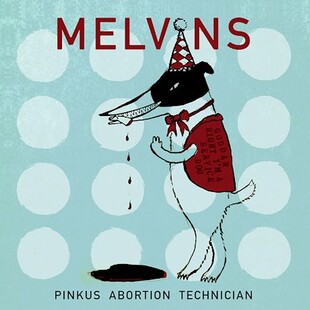 I should really stop being surprised about what the Melvins do. As if countless collaborations and projects under their banner are anything unusual, this latest record features two bassists (for the first time!) and one of those is the creative, wonderful Jeff Pinkus (Butthole Surfers/sometimes Melvins) and the equally amazing Steven McDonald (OFF!/Melvins/Red Kross) providing a low end assault.

The title, to address the obvious, is a play on the Butthole classic Locust Abortion Technician for those who don't know their alt rock history.

So what of the content here? Well there's 8 tracks of slightly unhinged nonsense here. Apparently the guys all drank a lot of coffee for this recording session and you can kind of tell. It's all rather silly, but really rather interesting too.

The opening salvo comes in the shape of Stop Moving To Florida which is a madcap caper that mashes James Gang’s Stop and Butthole Surfers’ Moving To Florida together into what might be the most self-aware and meta song ever. References to people not knowing the song in the first place will fox a lot of people, myself included.

Elsewhere, the Devo/Black Flag stylings of Embrace The Rub pokes you in the eye while chewing bubblegum before the slinky, almost sexy Don't Forget To Breathe takes you into its sweaty palms. The two basses really work together here, both providing a pleasing, parping sound that leads the Eastern scale it follows.

Similarly bass-led and intriguing is the excellent Flamboyant Duck which combines an almost Meat Puppets lead acoustic line with the two basses meandering by themselves underneath. The guitars only rush in towards the end, giving it that Melvins touch.

Break Bread (for the aforementioned flamboyant duck?) also has a country touch, in the off-kilter way you'd expect the four musicians involved to make together. Sometimes sounded cluttered with the two basses, it nonetheless sounds huge and loads of fun to record.

A deranged take on the Beatles' I Wanna Hold Your Hand slips in group vocals and some stuttering time signatures that will grab your attention. This is the sound of a group of friends having a laugh, only this group could make an innocent Beatles tune sound sinister. Loads of fun.

The laid back vibes, perhaps a coffee crash, surface on the lethargic and cool Prenup Butter before the group, who plan to tour this, cover the BS classic Graveyard with a fresh aplomb.

This will make most Melvins fans very happy, the tour will be something to witness.