Body Void I Live Inside A Burning House 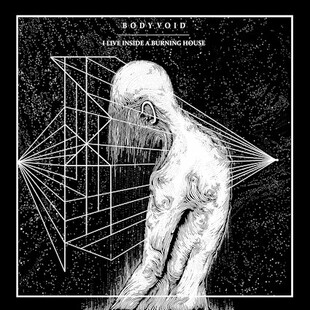 Well this is harrowing. In search of something to lift the spirits? Look elsewhere.

Body Void are fully paid-up members of the Khanate Club, think long and drawn out bass-rich passages of pure leaden misery, overdubbed with desperate cries and a generally misanthropic feel. These San Franciscans have apparently changed tack slightly since their debut Ruins to make things more elongated and punishing and it shows.

The 18-minute Haunted collapses around the ten-minute mark into pained piano and stark lead guitar sections, giving the vocals the room to fester and strike at the heart of your ennui. You wonder if the players know the abject feeling of claustrophobia they are creating or whether it just flows. All of a sudden, a crushing, blasting section takes hold, icy, black metal blasts pierce the atmosphere and you suddenly click, these guys are sadists, pure and simple.

Seeking to get away from the traditional sludge/doom aesthetic, the band's focus is queer identity and mental health issues. With so much suffering in oneself as much as within society when it comes to these topics, it's only fitting that the music sounds like a monumental struggle. It's perhaps at the moments where the battering bass and drums pause that Body Void excel the most. A lone and bleak section midway through Trauma Creature forces you to stop yourself, to consider their overall message. That might well be 'What can we do to protect ourselves?' coupled with 'Why are people so awful?'.

Existentialist as well as aggressive and barbed, I Live Inside A Burning House is an uncomfortable listen, not just from the ways you might expect. Often times you can tell when a band seems to be playing up to a genre's aesthetics or themes. Body Void seem to be using the music as therapy. Doom hasn't sounded this raw in a while. Comparisons seem lazy, but the stark and blunt Khanate, the unhinged mess of The Body and similar artists could be employed here. Whatever, let this record speak for itself, it certainly has a lot to say.