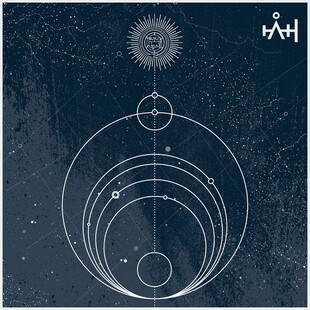 When I think of South American heavy music, I think of vast psychedelic head trip freak outs. To lump a whole continent together like this is patently ridicuolus, but I've ventured on many an evening of discovery, moving from bands linked in kinship revealing beautiful tripped out stoner rock from Venezuala to Chile and all countries in between. My initiation into this was, of course, Los Natas, and here's another Argentinian band of similar mindset.

Iah spend time creating expansive imagery through their music, linked to the almost obligatry astronomical visuals of the cover art. This self titled album comprises of four tracks of instrumental stoner and psych, the latter elements fragile yet graceful to bring in clear quiet-passage post-rock similarities.

There's a gentle, relaxing introduction through Cabalgan Los Cielos, post-rock's patience to build and psychedelia's peace and contentment to not drive forward in any hurry combine. Vocals would be welcome, or at least samples to draw the attention a la Vinnum Sabbathi. All fine without, it just lacks a focal point. The album's highlight is Ouroboros, once more delicate post rock opening, flowering into a beefier stoner rock propulsion, flitters between the two nicely.

The longest track Stolas doesn't quite work, a bit clunky throughout. It doesn't maintain the balance between the calm and the purposefully rawer stoner edges and drags all the way through its way-past eight minutes length. Eclipsum rounds up, a touch of playful jitteriness in the opening, instrumental stoner reminders of Karma to Burn. It settles towards its end, cross legged on the floor of a candle lit room, wistful and content, one last barge of riff and it's done.

At all times intriguing and relaxing, it does lack for deep and dense inward mindfucking trip, missing a cohesion that would knit it together and tie you within. Yet even if viewed as component parts rather than a wider allied whole, it still wins, the smooth post rock entering balletically, the stoner rock providing a welcome grit, the amalgamation an enjoyable psychedelic journey.