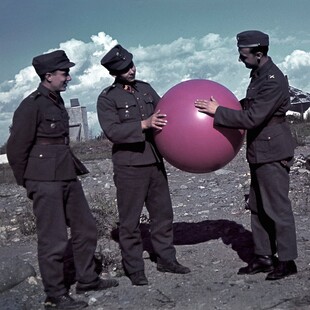 Pharaoh Overlord certainly like to make things awkward. The Finnish band made up of members of the illustrious Circle have essentially, underneath everything, created what probably is a more than decent psychedelic record here, but then taken a razor blade to it, careful slits here, wild slashes through there. Many start as proggy psych driven rock, jaunty on the face but slightly askew the more you delve. Then... a fucked up voice speak-grunts (like Vigo the Carpathian from Ghostbusters 2 gargling gravel after a night on the tabs) all over the middle, completely ruining the mood, at odds with the mellow flow before and beneath.

It is annoying, but a statement of a band willing to truly fuck around with their core sound. Hopes this may be restricted to the opening track are quickly dispelled. Maailmanlopun ateriana begins with atmospheric psychedelic synth, with a rolling bass. But then the grunter returns, in time and level with the rest of the band now so it doesn't just blot out the rest of the track, more a spoken word performance from a death metal vocalist who finds his voice switch stuck to the day job level. It sounds fantastic in fact, and allied to the 80s synth pop flourishes in the deeper trippy drive, it creates an imaginative whole.

On Meanwhile, twisted noises from the darkness spiral round, a deliciously smooth bass line guides tieing it altogether and bringing everything along with it, jazz lounge fed an elephant dosage of alien drugs. By fourth track, Lalibela Cannot Spell Zero it is all kicking in, the exposure to such blatant intoxicants emitted chemically eroding any alertness of mind, any scepticism towards the oddities within. How else can you explain how a track such as this, with the throat clearing bark talk over cosmic rock sound weirdly alluring? It sounds like Bane fronting Hawkwind. The ace synth n clap with dated-futuristic-vision vibe of the finale give it a Scando, 70s, prog all round feel, which is pretty cool.

I've heard Pharaoh Overlord before - albeit the odd album, not their whole catalogue - and I can't recall vocals like this, but hey ho, this is where they've gone. It defines the album on first listen, but falls in line on subsequent runs through, instead merely filed under weird alongside many other aspects, mostly admirably. It all creates a slightly deranged psych record that certainly grows on you, but no doubt will never sit completely naturally.