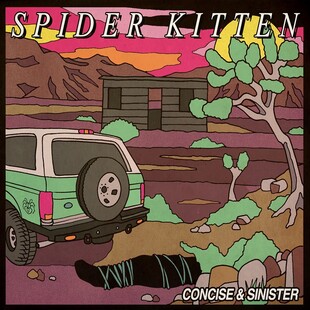 Low key they may be, but a new Spider Kitten release is always welcome. They've been around for an age now, but while they don't appear live too often, the wide-ranging styles and obvious deep thought that goes into each album makes them a must hear.

Concise and Sinister is but four tracks, two long two short, and showcases the miscellany of genre input into the usual doom base. The first track, eleven minutes long, is A Glorious Retreat, a vocal-lead entry in a near-Neurosis style. A big and slow simple doom riff then takes over, with contrasting clean vocals. Delving in further, a strange, gothic post-metal world is inhabited, it doesn't wander far, lethargic in both light and shade. Just as I'm losing interest, it evolves some, grand doom of a distant dream, reaching towards the realms imagined by Yob or Elder, improving the hazier it gets, the further it travels.

It changes tack on Alone and Forsaken, a Hank Williams cover - pure acoustic blues; when the backing vocals whisper behind it reminds me of the Ballad of the Broken Seas collaboration album between Isobel Campbell and Mark Lanegan. And then... a rather excellent 45 second blast of hardcore with the legendary Paul Catten on vocals. It is invigorating, as awesome as it is unexpected after the already wide ranging styles preceeding.

It ends with Martyr's Breath, sci-fi psych, synth n doom. The valiant attempt at smooth vocals within doom worlds reminds me at places of Gonga before they went instrumental. It lurches along its ten minute stretch menacingly.

That's some record. The behemothic tracks that bookend the album aim big, going for grand doom atmospheres, and while they don't come off consistently across either, it is an approach to be applauded. The middle couplet bring wild variation, and with it only interest and admiration. Spider Kitten have been going for 17 years now, and through such innovation and intrigue, they stay afresh.