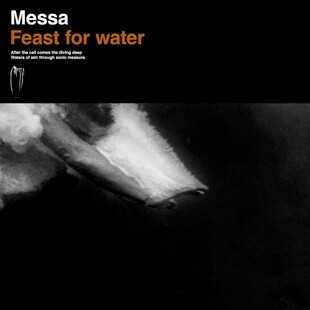 Messa mess around with their musical stylings a fair bit. While on the surface you detect a band following a natural and spiritual lineage from their compatriots Jex Thoth - a still valid comparison - Messa add in so much more, controlled additions on their mindset of jazz, ambience and gothic atmosphere.

After a mood setting intro, Snakeskin Drape's water sounds soon cede the central platform to beautiful vocals - think Sabbath Assembly or Lotus Thief - arriving almost alone, the first entry of any guitar of note on the rushed exit of the opening sequence, heavy proto-doom reminiscent, without being intentionally or hamfistedly retro.

The middle couplet truly set the scene. The Seer is all lounge-jazz ease, what could be the mood music in a smart black-bowtie soiree, but for the occasional interruptions of heaviness. It is too uneventful - boring if you want to be blunt - but there's a band relaxed to toy around with the scenarios their sounds create, which at least makes it interesting. This progresses into the beginning of She Knows, the 50s film noir vibe now more than just a song quirk, part of the overall charm and effect of the album. Aided by keys, in its minimalism it practically becomes trip hop, of Portishead or Lamb, with the odd riff to accompany. It feels like it lasts forever - for better and worse.

After that, Tulsi is a mixture of psychish heaviness in its earlier moments, sorrowful sax adding to the morose mood in its latter. The excellent White Stains greets you with a nice doomy riff, and then straight up ethereal-tripped doom, like SubRosa, it is a gorgeous track, although perhaps not the most representative.

Feast for Water isn't perfect - it lacks for stand-out shout-out belting tracks, its variances from doom diverge too far for my personal taste's comfort, and it drifts along too often... BUT it is different, it is (relatively) unique. That counts for a hell of a lot. It is likable from start to end despite those faults, a well constructed whole, a picture imagined and then depicted expertly.