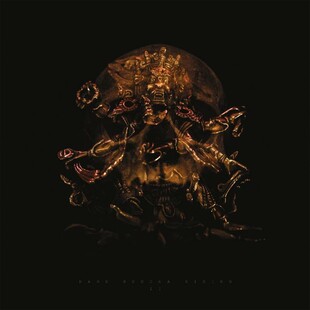 This is psychedelia in black. It is not to say the trip is bad, but laced with hallucinations of dark beings, thought processes cast inward, eschewing the colourful spectrum usually cast.

The first of only two tracks, Mahathgata I is fifteen minutes of dense swirling atmosphere, a large pouring of Ufomammut and a dash of Neurosis in the reminders it conjures. Repetitive riffs spin round and round so as to create a vortex, a psychedelic state achieved despite the heaviness retained. As the centrifuge slows, that grip is released as gravity returns to normal, wallowing in the depths of doom for several minutes. It is moody, more than just the calm after the kaleidoscopic storm, a new phase in itself now. The half buried vocals, part mumbled through, part screeched lead the move to eeriness.

Mahathagata II differs - truly meditative, an engrossingly spiritual sensation exists from within the inactivity. The ambient drone continues for more than half of its ten minutes, thereforth gaining wails and a drum beat that acts as the only sense of timing and momentum apparent track long, otherwise content to reside in the clouds in a timeless state. By its end you feel soothed, completely at ease.

The only negative is there's not enough... I need more. Dark Buddha Rising have created something magical here, entrancing you into their darkness, submitting yourself - and then they depart, leaving you to face the strange awakening back to reality alone.