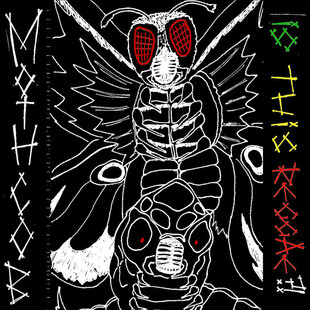 Lincoln punks Mothcob have injected some much-needed energy into a city that seems to have been asleep until recently in terms of loud, heavy and interesting music. Along with bands like Throatpunch, Tiger Warsaw, Skinlover, Guts and others, they are proving Lincoln's relative isolation is no barrier to good music.

Their shows have become synonymous with human pyramids, drunken sloppiness and bucketloads of fun, but this release shows that they rise above the dumbness that can sometimes hamper the genre.

Strangely, the music takes more cues from grind and heavier music than their live shows suggest. It's fast, crusty, but also metallic with it. The drums pound away with a pinpoint snare sound while the vocals tear through with a satisfying snarl.

Samples pervade this release, giving it a distinctly 90s grind feel, films and TV shows cut into the madness. Songs fly by without stopping for breath, just as it should be. There's a sense of the absurd to these guys, like if you're paying too much attention, you're rewarded with a peek inside their damaged brains. Witness the chuggy, tuff guy beatdown at the end of Penguin, incredibly silly, but a little bit too much convincing style.

See also, the silliness on Sandwiches and Cars before the raging Quantum Hancock takes hold, all blistering snare rolls and relentless grind action.

Short, angry and incredibly silly, Mothcob could well be your new favourite band, this albums been on rotation since it arrived.

Forums - Reviews and Articles - Mothcob - Is This Reggae?!