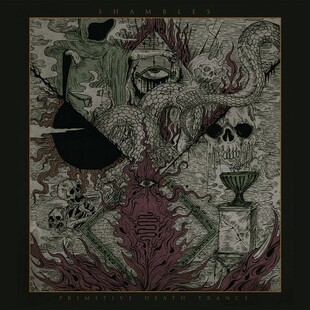 With a name like that, you'd think you're going to be addressed with drunk, sloppy and shambolic punk, surely. Yet Shambles, from Thailand, have a history of flipping between genres across their twenty plus year history, including previous stints within grindcore and black metal, settling here and now on death doom.

All too often this carve out genre that sits midpoint between the two signposts comes as a warning, a non-committal offering to come that is uninspired and staid. When done right however, it is invigorating. Shambles achieve this state, harnessing the sheer majesty, weight and depth of doom and adjoining it to the shrouded mystery of the most interesting death metal artists.

This four track EP is consistently excellent. Once the opening Daemon kicks in, you can quickly be carried away on the rolling, detonating riffs, imaginations of High on Fire shoulder to shoulder with Grave Miasma on the war march, across treacherous battleground with storms raging in the skies above. It switches well between the contrasting pace of doom and death, and even at seven minutes long, you don't want it to end.

Dismal Pantheons whirs with the affront of Bölzer, while Illusion of the Void shimmers with a restrained threat for near two minutes; released it pounds outwardly, relentlessly, vague recollections of Portal's signature ebb and flow rhythmic mastery. The title track ends, constantly swirling, tempestuously, a push and pull of tempo change that fucks with your sense of balance and ease.

More death than doom, yet beneficiaries of the input of both, Shambles create a sound that pulsates outwardly, magnificently. Primitive Death Trance is addictive, containing a flow that beats out a tattoo that you subconsciously submit to, that dictates your internal rhythm.