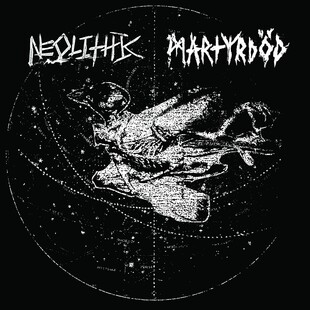 A one track each, nine minutes including the time to turn the record over and you're done, American and Swedish pairing split 7", both bands from that gloriously dirty world of the heavier end of crust. Released on Deep Six Records, this arrives ahead of Neolithic's Cult of Ignorance EP, out shortly after, and pairs them up with the old hands and revered Martyrdöd, happily reappearing on record for what I think is the first time since the sublime List album of 2016.

Neolithic, from Maryland, offer Inner Adversary, all death metal and d beat, a bit Xibalba, it pelts it along at ridiculous speed, sparks flying, infecting anyone near with its grimy sound. It slows some half way through, giving the track much needed range, and as they emerge from there into some croak vocalled doomy fare, it continues on an upwards trend. Impressive.

There are few better at pushing crust to the extreme arenas of metal than Martyrdöd. War of Worlds sounds like one of their peers and countrymen Disfear, a glorious slew of frenzied vocals, notable guitar twiddling and a truly hammering drum battery, it has an almost NWOBHM stomp about it, albeit buried within a gloriously full on and packed onslaught. As per, it is fantastic.

And that's it, a perfect pairing, two top notch tracks from names new and old, and a record to seek out. Good work all round.