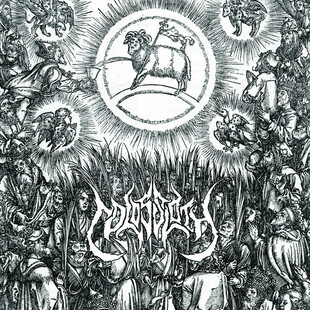 Colossloth is somewhat of a success story in noise circles. Not only does the 'sloth play countless shows nationwide to much acclaim, he's also here delivering his second record for the excellent Cold Spring label.

Following on from the impressive Outstretch Your Hands For the Impress of Truth LP, Heathen Needles seems more multi-layered and foreboding from the off. The same insistent bass throb is still there, but there seem to be more brash, ear-bothering samples here. A twisted vocal distortion one moment, a bending of feedback the next. Cyclic and a little dizzying, early track Goodwill Scars is a twisted, disorientating mass. When delicate, strange piano comes out of the blur at the end, it's a stark reminder that Colossloth (aka Wooly) likes to meld these two worlds so they become one narrative.

The title track here is perhaps one of the more interesting, an almost melodic bassline trumpets along like Geogaddi-era Boards of Canada, while Wooly fires off synth notes and flashes of playful feedback. This is perhaps one of the most upbeat sounding Colossloth tracks recorded yet. Sure there's still a swathe of fuzz, but to find some hope in the often monochrome world this music inhabits is refreshing.

To almost immediately counteract that, witness the rather body funtion-heavy Lain Inert which seems to feature someone gagging or trying to rid themselves of lunch. Truly disgusting, it's as real as that record where Matmos used plastic surgery operation noises to craft beats (A Chance To Cut Is A Chance To Cure).

More hope among the ruins results in the winding We Had A Pact which could well soundtrack a videogame's flashback sequence, or be playing as you explored a blown-out nuclear fallout town in digital browns and greys. The fact you can conjure up such images from the music here is fantastic.

What is clear from this record is a sense of more experimentation has entered Colossloth's universe. Less bleak and unforgiving, this is the more hopeful, but equally as uncompromising cousin to OYHFTIOT and as a result it's a scintillating listen.