SECT No Cure For Death 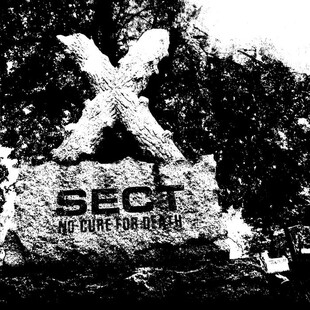 Supergroup is a term bandied around a lot but when something like this drops into your inbox it really is time to sit up straight and pay attention. SECT is a brutal, furious melding of members of bands past and present including vocalist Chris Colohan (Cursed, Burning Love, Left For Dead), guitarists James Chang (Catharsis, Undying) and Scott Crouse (Earth Crisis, The Path Of Resistance), bassist Steve Hart (Day Of Suffering), and drummer Andy Hurley (Racetraitor, The Damned Things).

With that calibre of scene veterans involved, you might have an idea of what this sounds like. Sure, Colohan's vocals are distinctive, giving it a Cursed-like sound from the off but there's a real mix in there too. It's not meat and potatoes hardcore by any means despite the imagery and lyrical content. No, there's much more going on under the surface. Guitars are tuned to a strange frequency and it feels like you're in a sweaty practice room with them as these short, sharp songs roll by.

The record is indeed brief, many songs apply a full-on burn for around a minute before collapsing under their own weight. You can imagine their live shows are a swell of feedback and flailing limbs, the songs cutting through the chaos.

The lyrics are fantastic. As always, Colohan's delivery is cutting and devastating. Lines like Can you see the stars through the iron bars tonight? have heavy resonance and not to be too obvious, but seem to be distilled Trump reactions. The whole record sounds like a poison pen letter to the current administration, acerbic, pointed and just reactionary.

This record feels like it should have already been made. It's tight, packed with emotion and comes fully formed. There's no way of overstating this, it's an incredible piece of work and rages harder than most bands half these guys' age.

Forums - Reviews and Articles - SECT - No Cure For Death