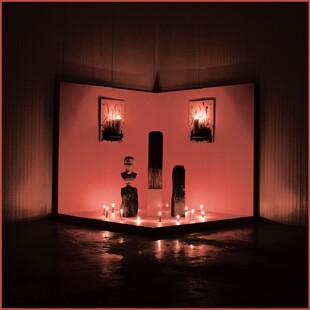 Ghold until recently were a doom duo that left the stereotypes of both those descriptors happily unfulfilled. Now a three piece, they continue down paths less trodden, happily foraging through wilderness, orienteering from their own scrawled map.

Stoic is their latest journal of such travels, to be released by the fledgling Crypt of the Wizard label, borne from the London record shop of the same name. Nothing Dreamt is the first of the six tracks here, its detatched, simple repeating riff with almost-chanting vocals gives a less frivolic Big Business impression. When it does appear to develop, it does so stutteringly, purposefully awkward. It is the sound of a band emboldened through experience, comfortable in their skin to not fit in. The only issue is whether that then impacts on listening experience. It is hard to say, initial impression is one of engaged interest, but this may lack allure to return.

After the light Sigur Ros-ish murmurs of Blue Robe, Ruptured Earth (Head in Sand) takes it back into the heavier scale, bass rumbles draw cinematic skies. Again it is reminiscent of Big Business, maybe more so. It is the album's most immediate output, and the best too, although that might just be as a result of the preceeding statement. It slows and re-arms, riff loaded, getting even better as it goes on.

It ends with Skhul V and Skhul VI - the first lumbering with little momentum, it travels only within its own metre squared yard, as if an angered thought tormenting a cluttered mind, revolving, jabbing and intensifying but ultimately leading nowhere but overthinking irritation. The rare breaks into coherence bring nods to the Melvins. The latter is its reposte, as full forward as Ghold get, a thrashing revolution. There are dissonant noise-rock elements at play here.

It's not that they're stubbornly evasive or distantly avant garde, more that they often manage to avoid expectation - never a full on doom band, too kinetic to be drone, too disruptive to be hypnotic. At times, previous and here, and particularly on record, this makes Ghold a difficult listen, but ultimately one more rewarding than if they were easier to pigeonhole. Will we return to Stoic again and again? Who knows. Possibly not... only time will tell. But it is always intriguing to delve into their world.