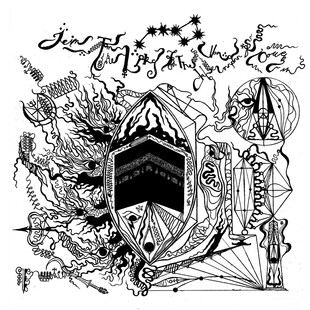 I don't know what's more worrying - the thought of what now inevitable prolonged plays of this album will do to my long term mental health, or the fact that I find this instantly addictive at all, and what that says about me. Tetragrammacide, from India, call on the full range of extreme metal, channeling them through their own diseased filter so that they mesh, bruise and fight against each other for supremacy, any negative impact on the output or listener be damned.

Think of the sonic extremeties of the outliers - think of the the all out war of Revenge, the decrepit doomed drudge of Primitive Man, the cosmic death wave patterns of Portal, although truth be told individual named references miss the point. This is jaw droppingly intense, each track, each moment overloaded so as to ambush your senses and black out the sun.

Yet for all that, it is constantly compelling. Buried well beneath is a structure, difficult to detect on the surface but one which maintains the core to ensure it doesn't collapse under its own mass, propelling everything forward so as not to stand still nor suffocate within its own shadow. Once you've survived the ordeal for the first few minutes, the ferocity of attack, the unrelenting drum battery softening your skull, you become submissive to its "charms". What initially is a near unlistenable repetitive din transforms into hypnotic capture.

Take The Prognosticators of Trans-Yugggothian Meta-Reasoning as a prime example, early on stranding you within their web. The middle of the ultra-death metal Radicalized Matrikavyeda Operation... does concede something to flow and rhythym, magnificently so, damagingly heavy, driven forward through the riff with pressure built velocity. I could go on, but literally every track barring the odd obtuse noise stop gap is built to damage and corrupt, each distinct - a bewildering marvel in itself - despite the ubiquitous cloud of static that'll make your ears ring for hours after it ends.

Few will like this. It is just noise. It is ugly, violent... it is an utter mess. But for those few, this bludgeoningly depressive, destructive metal affront has rarely sounded so alive. I find it engrossingly brilliant... it has been on repeat since I first heard it.

What has become of me?