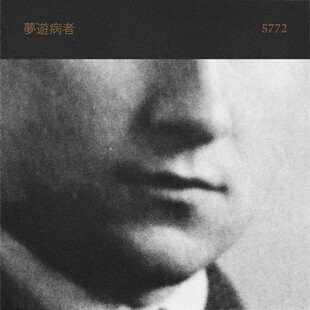 Black magic lies herein. An overseas collaboration with members spread wide in Japan, Russia and the US, this unusual make up, the vast separation of bandmates must not hinder - and perhaps inspires - something which is crazed and yet special. 5772 first appeared online last year, one of the albums of the year, now getting a welcome vinyl and cassette run through Annapurna and Sentient Ruin.

夢遊病者 (which translates to Sleepwalker) plunge straight in, from the beginning of opening track Empty Urns heading directly into a sub-industrial crawl, unnerving vibes within a noise atmosphere, a mechanical black metal elemental strangeness, it creeps and slithers in the shadows one moment, jars and spasms in and out of the light the next. It is utterly fascinating. The guitar line of White Linen could be from some light end psychedelic rock whimsy, but when layered upon by drum fits and unsettled whispered vocals, it is a much darker beast, the contrasts creating something unique.

The galloping guitar, that runs between, ducks beneath and roughly treads atop multi-angled vocals and airy psych swirls on Plain Wood are wonderful, as is the flowering of Black Ribbon's post-black metal from the crunching ugliness of its beginning. No Flowers is much more open, the opening of curtains to a bright and hopeful day - relative and in context, of course - the eerie vocal whispers still haunt, the drums still pummel. The clusterbomb explosiveness of Only Stones is the final act of derangement.

There is a nagging strange emotion album long - that 5772 feels oddly soothing, as opposed to the haunting dread you feel the majority of sounds released should invoke. My mind is drawn to Oranssi Pazuzu comparisons, which are valid but loose. The free structured experimentalism, that may take influence from the rich history of Japanese psychedelia, is harnessed expertly, creating a whole that is wild, unpredictable and completely absorbing.