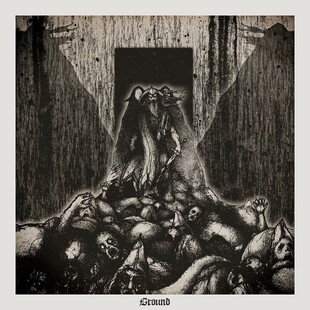 Barcelonians wanting to go it alone... no, not the current Catalonian political climate, but two souls fed up with the challenges of being in a band of four or five members, left, then found each other last year to start up as a doom duo. There's plenty of the four legged in our genre nowadays, and while its no less impressive to hear the weight and volume such a set up can carry, they can't rely on novelty alone any longer.

Ground do sound more than the sum of their parts, this is full on throughout, never wanting for further input. The album, their debut full length, is long, ten tracks that each fill between around five to eight minutes each, so they cover lots of ground (....) in achieving that feat. It is however, on the whole, largely unoriginal. It is impossible not to report, obvious reminders to scene stalwarts and a sound that is constantly familiar. But it is hard to dislike.

Ritual is nice and slow, a big tasty riff in the middle warms you to them from the start. Penubra begins with stoner groove within heavier environs, before switching in and out of lethargic doom heavy chugs, touring the neighbourhoods of the stoner / doom / sludge constituencies.

There are easy to spot reminders of High on Fire (eg Tormenta) and, naturally, Black Cobra, particularly on Implora, which subsequently breaks from that mould into stoner territories. It all may read like a release not to bother with, but I'd argue otherwise in that it wins despite the familiarity - honest, wholesome doom done right, with tone and riffs to titilate modern doomheads anywhere. Inmundo's grime adds in a punk depravity to darkened sludge, albeit, admittedly, in a distinctly Eyehategod manner.

It suffers from being a tad overlong, patience and goodwill to ignore the blatant comparisons wears thinner as it goes on. It drifts a little along that complaint. But future listens, focused on the highlights will not suffer that worry. And for all my written negativity, I must report that I come out of this with enjoyment of the album. I is nothing new, but it does its influences proud.

Forums - Reviews and Articles - Ground - I